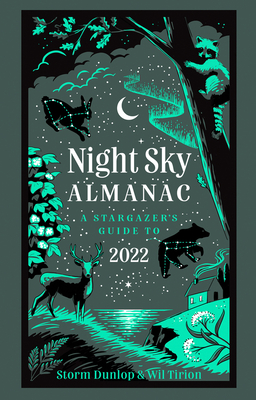 Follow the progress of constellations throughout the seasons with this beautiful companion to the night sky from Astronomy experts Collins. With the aid of easy-to-understand monthly calendars and maps, you will chart the rhythm of the lunar phases, discover events that light up the sky for brief periods and explore the rich tapestry of characters that adorn the starry canvas overhead. You can delve as deeply as you like, or follow your own favorite subject throughout the year.

The Royal Observatory, Greenwich is the home of Greenwich Mean Time and the Prime Meridian of the World, making it the official starting point for each new day and year. It is also home to London's only planetarium, the Harrison timekeepers, and the UK's largest refracting telescope. It runs the annual Astronomy Photographer of the Year competition. Storm Dunlop is an experienced Astronomy and meteorology author and translator. Books include Clouds (Haynes, 2019), Gem Weather (Collins,2012), How to Read the Weather (National Trust, 2018), MeteorologyManual (Haynes, 2014), and Practical Astronomy (Philip’s, 2012). Storm is also the lead author for the bestselling annual Guide to the Night Sky (Collins). Fellow of the Royal Astronomical Society, the Royal Meteorological Society, and a member of the International Astronomical Union. Wil Tirion was trained in graphic arts and has always had an interest in astronomy and especially star charts. In 1983 he became a self-employed full-time Uranographer. Since then he has contributed to many atlases, books, and magazines. In 1987 he received the ‘Dr. J. van der Bilt-prize’, a Dutch award for amateur astronomers. In 1993 this was followed by a second, more international ‘award’ when a minor planet was named after him: (4648) Tirion = 1931 UE.