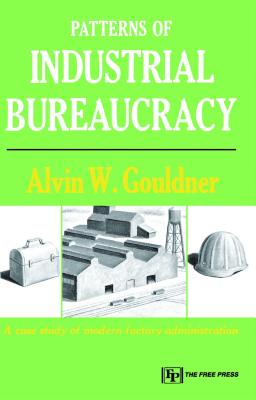 Alvin W. Gouldner takes readers through a case study of modern factory administrations in order to reveal the relations between workers and management at an industrial plant and in the community outside of it.

The process of bureaucratization is found to be composed of three distinct tendencies: the “mock bureaucratization” pattern, characterized by the failure to enforce or obey rules; the “representative” pattern, where rules are both enforced by management and obeyed by works; or the “punishment-centered bureaucracy,” where management attempts regular enforcement, but is resisted by workers.

Scientific interest in bureaucracy and in the general theory of organization requires the accumulation of a large body of research data and empirical evidence.

Patterns of Industrial Bureaucracy, informed through by a strong theoretical grasp of the material, is one of the major contributions to the literature of these fields.

Alvin W. Goulder was an American sociologist and critical intellectual known for his significant contributions to the literature of sociological framework. His most influential work is The Coming Crisis of Western Sociology.