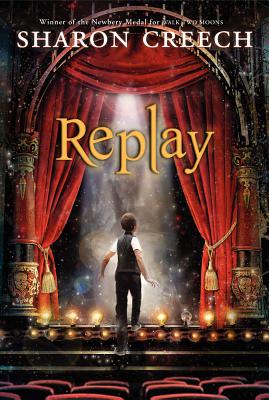 Newbery Medal winner Sharon Creech's inspired novel tells the story of a boy who fantasizes about who he is in order to discover who he will become.

Now with fresh and gorgeous new cover art, this touching tale has received many starred reviews, and was called a "warm, funny, philosophical novel" by Kirkus.

With the backdrop of a large family and a theater as its frame, this is a story about twelve-year-old Leo, who has a talent for transforming the ordinary into the extraordinary. That's why he's called "fog boy." He's always dreaming, always replaying things in his brain. As an actor in the school play, he is poised and ready for the curtain to open. But in the play that is his life, he is eager to discover what part will be his.

With the universal theme of finding one's true identity, and set amid a loud, noisy, memorable family, Leo's story is one that all kids will relate to. And there's a full play at the end of the book that kids and teachers can perform!

Sharon Creech has written twenty-one books for young people and is published in over twenty languages. Her books have received awards in both the U.S. and abroad, including the Newbery Medal for Walk Two Moons, the Newbery Honor for The Wanderer, and Great Britain’s Carnegie Medal for Ruby Holler.

Before beginning her writing career, Sharon Creech taught English for fifteen years in England and Switzerland. She and her husband now live in Maine, “lured there by our grandchildren,” Creech says.