The Man in the White Sharkskin Suit: My Family's Exodus from Old Cairo to the New World 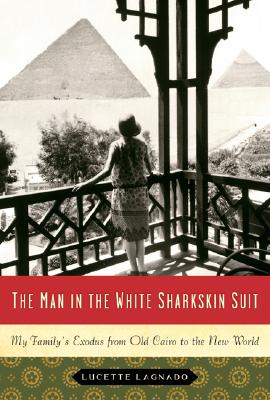 The Man in the White Sharkskin Suit: My Family's Exodus from Old Cairo to the New World

In vivid and graceful prose, Lucette Lagnado re-creates the majesty and cosmopolitan glamour of Cairo in the years before Gamal Abdel Nasser’s rise to power. With Nasser’s nationalization of Egyptian industry, her father, Leon, a boulevardier who conducted business in his white sharkskin suit, loses everything, and departs with the family for any land that will take them. The poverty and hardships they encounter in their flight from Cairo to Paris to New York are strikingly juxtaposed against the beauty and comforts of the lives they left behind.

An inversion of the American dream set against the stunning portraits of three world cities, Lucette Lagnado’s memoir offers a grand and sweeping story of faith, tradition, tragedy, and triumph.

Born in Cairo, Lucette Lagnado and her family were forced to flee Egypt as refugees when she was a small child, eventually coming to New York. She was the author of The Man in the White Sharkskin Suit, for which she received the Sami Rohr Prize for Jewish Literature in 2008, and is the coauthor of Children of the Flames: Dr. Josef Mengele and the Untold Story of the Twins of Auschwitz, which has been translated into nearly a dozen foreign languages. Joining the Wall Street Journal in 1996, she received numerous awards and was a senior special writer and investigative reporter. She died in 2019.