The Thinking Fan's Guide to the World Cup 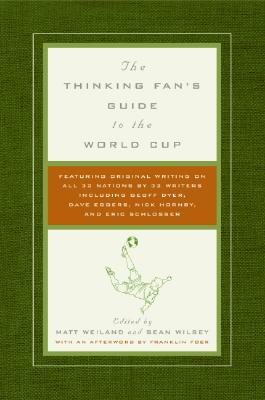 The Thinking Fan's Guide to the World Cup

The Thinking Fan's Guide to the World Cup features original pieces by thirty-two leading writers and journalists about the thirty-two nations that have qualified for the world's greatest sporting event. In addition to all the essential information any fan needs—the complete 2006 match schedule, results from past tournaments, facts and figures about the nations, players, teams, and referees—here are essays that shine a whole new light on soccer and the world.

Plus an afterword by Franklin Foer on the form of government most likely to win the World Cup.

Matt Weiland is the Deputy Editor of The Paris Review. He has been an editor at Granta, The Baffler and The New Press, and he oversaw a documentary radio unit at NPR. His writing has appeared in the New York Times Book Review, New York Observer, The Nation and The New Republic. He is the co-editor, with Sean Wilsey, of The Thinking Fan's Guide to the World Cup and, with Thomas Frank, of Commodify Your Dissent: The Business of Culture in the New Gilded Age. He lives in Brooklyn with his wife and son.

SEAN WILSEY, the author of a memoir, Oh the Glory of It All, and an essay collection, More Curious, is at work on a translation of Luigi Pirandello’s Uno, Nessuno e Centomila for Archipelago Books and a documentary film about 9/11, IX XI, featuring Roz Chast, Griffin Dunne, and many others (www.ixxi.nyc).