Temples, Tombs, and Hieroglyphs: A Popular History of Ancient Egypt 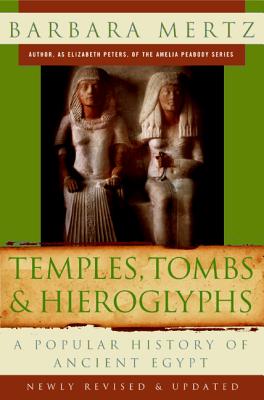 Temples, Tombs, and Hieroglyphs: A Popular History of Ancient Egypt

World-renowned Egyptologist Barbara Mertz explores the reality behind the bestselling fiction she writes (as Elizabeth Peters) and casts a dazzling light on a remarkable civilization.

Afascinating chronicle of an extraordinary people—from the first Stone Age settlements through the reign of Cleopatra and the Roman invasions—Temples, Tombs, and Hieroglyphs brings ancient Egypt to life as never before. Lavishly illustrated with pictures, maps, and photographs, it offers tantalizing glimpses into Egyptian society; amazing stories of the pharaohs and the rise and fall of great dynasties; a sampling of culture, religion, and folklore; stories of explorers, scientists, and scoundrels who sought to unravel or exploit the ageless mysteries; and new insights into the architectural wonders that were raised along the banks of the Nile.

Barbara Mertz is a New York Times bestselling author who writes the popular Amelia Peabody mystery series under the pen name Elizabeth Peters and romantic suspense novels as Barbara Michaels. She was born and brought up in Illinois and earned her Ph.D. in Egyptology from the University of Chicago's famed Oriental Institute. Named Grand Master at the inaugural Anthony Awards in 1986 and Grand Master by the Mystery Writers of America at the Edgar Awards in 1998, she lives in a historic farmhouse in western Maryland.