Art of Living: The Classical Mannual on Virtue, Happiness, and Effectiveness 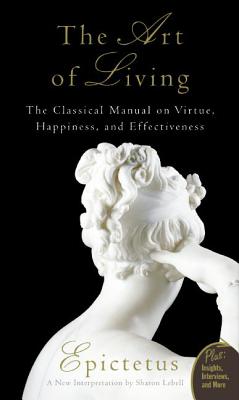 Art of Living: The Classical Mannual on Virtue, Happiness, and Effectiveness

By  Epictetus , Sharon Lebell
Paperback
$ 15.99
Likely On Our Shelves

Epictetus was born into slavery about 55 ce in the eastern outreaches of the Roman Empire. Once freed, he established an influential school of Stoic philosophy, stressing that human beings cannot control life, only their responses to it. By putting into practice the ninety-three witty, wise, and razor-sharp instructions that make up The Art of Living, readers learn to meet the challenges of everyday life successfully and to face life's inevitable losses and disappointments with grace.

Epictetus (circa 55-135 ce) taught in Rome until the year 94 ce, when Emperor Domitian banished philosophers from the city. In exile, he established a school of philosophy where his distinguished students included Marcus Aurelius, author of Meditations. Some 1,863 years after Epictetus's death, Tom Wolfe revived his philosophy in the bestselling novel A Man in Full.

Sharon Lebell is a philosophical writer and musician who lives in Northern California. She also produced Epictetus's A Manual for Living.