State by State: A Panoramic Portrait of America 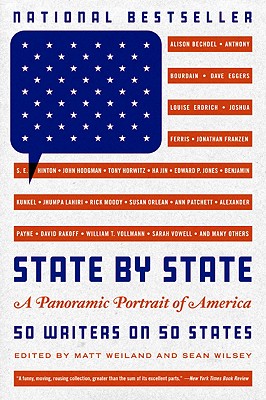 State by State: A Panoramic Portrait of America

Edited by Matt Weiland and Sean Wilsey, State by State is a panoramic portrait of America and an appreciation of all fifty states (and Washington, D.C.) by fifty-one of the most acclaimed writers in the nation.  Contributors include renowned and bestselling authors such as Louise Erdrich, Jonathan Franzen, Ann Patchett, Anthony Bourdain, William T. Vollmann, S.E. Hinton, Dave Eggers, Myla Goldberg, Rick Moody, and Alexander Payne.  Inspired by the Depression-era WPA guides and awarded an “A” grade by Entertainment Weekly, these delightful essays on the American character deliver “the full plumage of American life, in all its riotous glory” (The New Yorker).

Matt Weiland is the Deputy Editor of The Paris Review. He has been an editor at Granta, The Baffler and The New Press, and he oversaw a documentary radio unit at NPR. His writing has appeared in the New York Times Book Review, New York Observer, The Nation and The New Republic. He is the co-editor, with Sean Wilsey, of The Thinking Fan's Guide to the World Cup and, with Thomas Frank, of Commodify Your Dissent: The Business of Culture in the New Gilded Age. He lives in Brooklyn with his wife and son.

Sean Wilsey is the author of Oh the Glory of It All, a memoir, and the creator, with Tamara Shopsin, of a related Web site, ohtheglory.com. He is also an Editor-at-Large for McSweeney's, and the co-editor, with Matt Weiland, of The Thinking Fan's Guide to the World Cup.