Brotherhood of Warriors: Behind Enemy Lines with a Commando in One of the World's Most Elite Counterterrorism Units 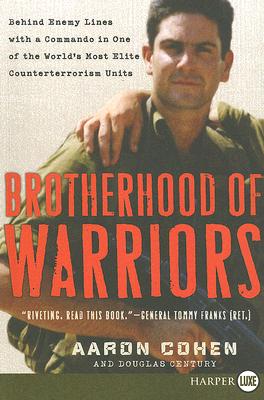 Brotherhood of Warriors: Behind Enemy Lines with a Commando in One of the World's Most Elite Counterterrorism Units

By  Aaron Cohen , Douglas Century
$ 25.95
Out of Stock In Store (Available to Order)

At the age of eighteen, Aaron Cohen left Beverly Hills to prove himself in the crucible of the armed forces. He was determined to be a part of Israel's most elite security cadre, akin to the American Green Berets and Navy SEALs. After fifteen months of grueling training designed to break down each individual man and to rebuild him as a warrior, Cohen was offered the only post a non-Israeli can hold in the special forces. In 1996 he joined a top-secret, highly controversial unit that dispatches operatives disguised as Arabs into the Palestinian-controlled West Bank to abduct terrorist leaders and bring them to Israel for interrogation and trial.

Between 1996 and 1998, Aaron Cohen would learn Hebrew and Arabic; become an expert in urban counterterror warfare, the martial art of Krav Maga, and undercover operations; and participate in dozens of life-or-death missions. He would infiltrate a Hamas wedding to seize a wanted terrorist and pose as an American journalist to set a trap for one of the financiers behind the Dizengoff Massacre, taking him down in a brutal, hand-to-hand struggle. A propulsive, gripping read, Cohen's story is a rare, fly-on-the-wall view into the shadowy world of "black ops" that redefines invincible strength, true danger, and inviolable security.

A writer and television producer, Aaron Cohen has won fourteen Emmy Awards and a Peabody Award for his work at NBC and HBO, and has twice received the Dick Schaap Award for Outstanding Writing for his work on the critically acclaimed boxing documentary series 24/7.

Douglas Century is the author and coauthor of numerous bestselling books including Hunting El Chapo, Under and Alone, Brotherhood of Warriors, Barney Ross: The Life of a Jewish Fighter, and Takedown: The Fall of the Last Mafia Empire, a finalist for the 2003 Edgar Award for Best Fact Crime. His most recent book, No Surrender, coauthored with Chris Edmonds, was published by Harper One and was the recipient of a 2020 Christopher Award. A veteran investigative journalist, Century’s work has appeared in the New York Times, Rolling Stone, Billboard, Tablet and the Guardian.