The Arrogant Years: One Girl's Search for Her Lost Youth, from Cairo to Brooklyn 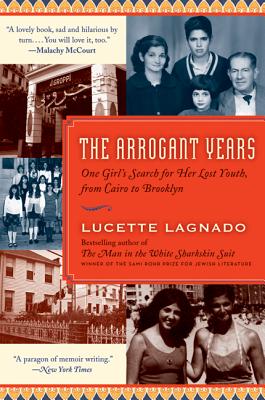 The Arrogant Years: One Girl's Search for Her Lost Youth, from Cairo to Brooklyn

Lucette Lagnado’s acclaimed, award-winning The Man in the White Sharkskin Suit (“[a] crushing, brilliant book” —New York Times Book Review) told the powerfully moving story of her Jewish family’s exile from Egypt. In her extraordinary follow-up memoir, The Arrogant Years, Lagnado revisits her first years in America, and describes a difficult coming-of-age tragically interrupted by a bout with cancer at age 16. At once a poignant mother and daughter story and a magnificent snapshot of the turbulent ’60s and ’70s, The Arrogant Years is a stunning work of memory and resilience that ranges from Cairo to Brooklyn and beyond—the unforgettable true story of a remarkable young woman’s determination to push past the boundaries of her life and make her way in the wider world.

Born in Cairo, Lucette Lagnado and her family were forced to flee Egypt as refugees when she was a small child, eventually coming to New York. She was the author of The Man in the White Sharkskin Suit, for which she received the Sami Rohr Prize for Jewish Literature in 2008, and is the coauthor of Children of the Flames: Dr. Josef Mengele and the Untold Story of the Twins of Auschwitz, which has been translated into nearly a dozen foreign languages. Joining the Wall Street Journal in 1996, she received numerous awards and was a senior special writer and investigative reporter. She died in 2019.