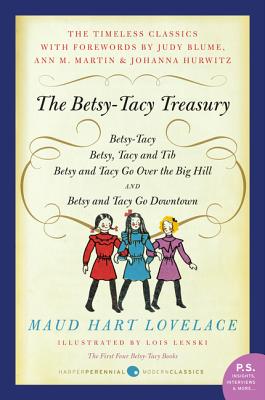 “Some characters become your friends for life. That’s how it was for me with Betsy-Tacy.” —Judy Blume

The first four books in the beloved Betsy-Tacy series, together in one volume, ready to delight a new generation of readers—and to bring a grownup generation of readers back to the engrossing stories of their youth. Following the childhoods of Betsy Ray and her friends in the late 1800s and early 1900s, this handsome anthology collects the original Betsy-Tacy as well as Betsy, Tacy and Tib, Betsy and Tacy Go Over the Big Hill, and Betsy and Tacy Go Downtown. Forewords by Judy Blume, Esther Hautzig, and Johanna Hurwitz, and the original illustrations by Lois Lenski, will make readers of all ages feel at home in the imaginative life of young Betsy Ray as she awakens to the challenges and triumphs of her home in Deep Valley (Mankato), Minnesota.

Maud Hart Lovelace (1892-1980) based her Betsy-Tacy series on her own childhood. Her series still boasts legions of fans, many of whom are members of the Betsy-Tacy Society, a national organization based in Mankato, Minnesota.