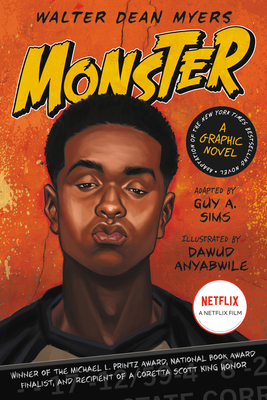 By  Walter Dean Myers , Illustrated By  Dawud Anyabwile , Guy A. Sims
Paperback
$ 12.99
Out of Stock In Store (Available to Order)

Monster is a multi-award-winning, provocative coming-of-age story about Steve Harmon, a teenager awaiting trial for a murder and robbery. As Steve acclimates to juvenile detention and goes to trial, he envisions how his ordeal would play out on the big screen.

Guy A. Sims, the acclaimed author of the Brotherman series of comic books, collaborated with his brother, the illustrator Dawud Anyabwile, in this thrilling black-and-white graphic novel adaption of Monster.

Fans of Monster and of the work of Walter Dean Myers—and even kids who think they don't like to read—will devour this graphic adaptation.

Walter Dean Myers was the New York Times bestselling author of Monster, the winner of the first Michael L. Printz Award; a former National Ambassador for Young People's Literature; and an inaugural NYC Literary Honoree. Myers received every single major award in the field of children's literature. He was the author of two Newbery Honor Books and six Coretta Scott King Awardees. He was the recipient of the Margaret A. Edwards Award for lifetime achievement in writing for young adults, a three-time National Book Award Finalist, as well as the first-ever recipient of the Coretta Scott King-Virginia Hamilton Award for Lifetime Achievement.

Dawud anyabwile is an Emmy Award-winning artist and the cocreator and illustrator of the groundbreaking comics series Brotherman: Dictator of Discipline, which is cocreated and written by his brother, Guy A. Sims. Dawud has also worked as a character designer on television productions such as The Wild Thornberrys and Rugrats as well as served as a production artist on a variety of music videos, commercials, and game animations.

Guy A. Sims is a poet and fiction writer as well as the cocreator of Brotherman Comics. He is the author of Living Just a Little: A Novel; The Cold Hard Cases of Duke Denim; The Kwanzaa Handbook; and The Kwanzaa Kids Learn the Seven Principles.