Midnight at the Electric 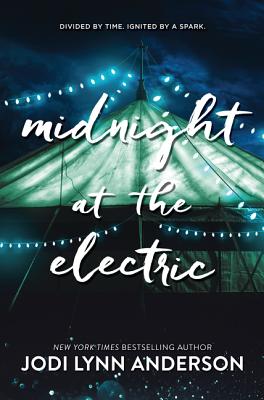 Midnight at the Electric

2065: Adri has been handpicked to live on Mars. But weeks before launch, she discovers the journal of a girl who lived in her house more than a hundred years ago and is immediately drawn into the mystery surrounding her fate.

1934: Amid the fear and uncertainty of the Dust Bowl, Catherine’s family’s situation is growing dire. She must find the courage to sacrifice everything she loves in order to save the one person she loves most.

1919: In the recovery following World War I, Lenore tries to come to terms with her grief for her brother, a fallen British soldier, and plans to sail from England to America. But can she make it that far?

While their stories span thousands of miles and multiple generations, Lenore, Catherine, and Adri’s fates are entwined in ways both heartbreaking and hopeful. In Jodi Lynn Anderson’s signature haunting, lyrical prose, human connections spark spellbindingly to life, and a bright light shines on the small but crucial moments that determine one’s fate.

“Deft, succinct, and ringing with emotion without ever dipping into sentimentality, Anderson's novel is both intriguing and deeply satisfying.”—Kirkus (starred review)

“Each character’s resilience and independence shines brightly, creating a thread that ties them together even before the intersections of their lives are fully revealed. Anderson’s piercing prose ensures that these remarkable women will leave a lasting mark on readers.”—Publishers Weekly (starred review)

“With quietly evocative writing, compellingly drawn characters, and captivating secrets to unearth, this thought-provoking, lyrical novel explores the importance of pinning down the past before launching into the mystery of the future.”—Booklist (starred review)

“Anderson …allows her characters to shine through, with each distinct, nuanced, and memorable.”—BCCB (starred review)

“Anderson deftly tackles love, friendship, and grief in this touching exploration of resilience and hope. A must-have for all YA collections.”—School Library Journal (starred review)

"In Midnight at the Electric, Jodi Lynn Anderson weaves a shining tale of hope in the face of adversity. " —Shelf Awareness (starred review)

Jodi Lynn Anderson is the New York Times bestselling author of Peaches, Tiger Lily, and the popular May Bird trilogy. She lives in Asheville, N.C., with her husband, her son, and an endless parade of stray pets.