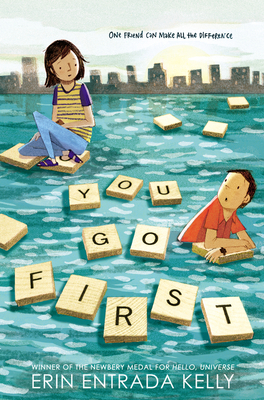 Twelve-year-old Charlotte Lockard and eleven-year-old Ben Boxer are separated by more than a thousand miles. On the surface, their lives seem vastly different—Charlotte lives near Philadelphia, Pennsylvania, while Ben is in the small town of Lanester, Louisiana.

Charlotte wants to be a geologist and keeps a rock collection in her room. Ben is obsessed with Harry Potter, presidential history, and recycling. But the two have more in common than they think. They’re both highly gifted. They’re both experiencing family turmoil. And they both sit alone at lunch.

During the course of one week, Charlotte and Ben—friends connected only by an online Scrabble game—will intersect in unexpected ways as they struggle to navigate the turmoil of middle school. The New York Times-bestselling novel You Go First reminds us that no matter how hard it is to keep our heads above troubled water, we never struggle alone.

Newbery Medalist Erin Entrada Kelly writes with an authentic, humorous, and irresistible voice. This engaging and character-driven story about growing up and finding your place in the world is for fans of Rebecca Stead and Rita Williams-Garcia.

New York Times–bestselling author Erin Entrada Kelly was awarded the Newbery Medal for Hello, Universe and a Newbery Honor for We Dream of Space. She grew up in Lake Charles, Louisiana, and now lives in Delaware. She is a professor of children’s literature in the graduate fiction and publishing programs at Rosemont College, where she earned her MFA, and is on the faculty at Hamline University. Her short fiction has been nominated for the Philippines Free Press Literary Award for Short Fiction and the Pushcart Prize. Erin Entrada Kelly’s debut novel, Blackbird Fly, was a Kirkus Best Book, a School Library Journal Best Book, an ALSC Notable Book, and an Asian/Pacific American Literature Honor Book. She is also the author of The Land of Forgotten Girls, winner of the Asian/Pacific American Award for Literature; You Go First, a Spring 2018 Indie Next Pick; Lalani of the Distant Sea, an Indie Next Pick; and Maybe Maybe Marisol Rainey, which she also illustrated. The author’s mother was the first in her family to immigrate to the United States from the Philippines, and she now lives in Cebu.