Stand Down: A J.P. Beaumont Novella 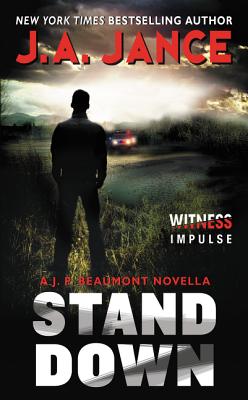 Stand Down: A J.P. Beaumont Novella

Life has shifted for J. P. Beaumont. After a tragic accident that devastated—and ultimately disbanded—his Special Homicide Investigation Team, he accepts that he has left homicide detection behind at this point, but he has a lot of unanticipated free time on his hands. He's keeping busy with renovations on the new house that he and his wife, Mel Soames, the newly appointed chief of police in Bellingham, Washington, have bought. But new fixtures and paint palettes can occupy only so much of Beau's daily life, and Mel is encouraging him to return to where he is needed: investigating crimes.

In the meantime, she is struggling to gain control of her new situation, cast into a department where some are welcoming—and some are not. It's been a few months, and the tension in the police department is rising, but Beau realizes Mel has to tackle things in her own way, so he refrains from advising. But when Beau shows up one afternoon to survey the construction at their new house and finds Mel's car there but no sign of her, his investigative instincts kick in. Suddenly he's back in the game—except this time, his heart is on the line as well as his professional dignity.

J.A. Jance is the New York Times Bestselling author of more than sixty books. Born in South Dakota and raised in Bisbee, Arizona, she and her husband live in the Seattle area with their two longhaired dachshunds, Mary and Jojo.