Hirohito and the Making of Modern Japan 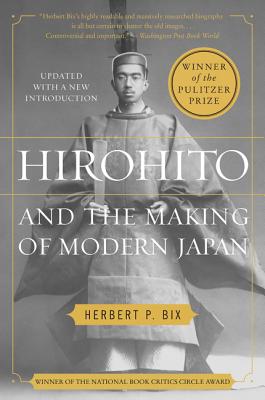 Hirohito and the Making of Modern Japan

Winner of the Pulitzer Prize

“A startling work -- awesomely ambitious, faultlessly researched, daring in its thesis, and profound in its implications."  — Business Week

"Magnificent. . . . everything a political biography should be."  — Richmond Times-Dispatch

This rich and powerful biography is now given fresh relevance with a new introduction by the author that explores how Hirohito’s legacy persists in Japan to this day, and how US foreign policy in the region in the last ten years is informed by our troubled past with Japan and with Hirohito as a ruler specifically.

Trained since childhood to lead his nation as a living deity, Japan’s Emperor Hirohito cultivated the image of a reluctant, detached monarch, a façade which masked a fierce cunning and powerful ambition. Historian Herbert P. Bix has unearned hundreds of previously untapped documents including the unpublished letters and diaries of Hirohito’s royal court, tracing the key events of his sixty-three-year reign (1926 – 1989), and shedding light on his uniquely active yet self-effacing stewardship. Debunking the common image of Hirohito as a pawn in the hands of the military, Bix exposes the emperor’s personal involvement in every stage of the Pacific War. With rare insight, he shows how Hirohito avoided punishment for his nation’s defeat and how the Japanese people have struggled to come to terms with this dark chapter in their history.

Herbert P. Bix grew up in Winthrop, Massachusetts, and earned his Ph.D. in history and Far Eastern languages from Harvard University. For the past thirty years he has written extensively on modern and contemporary Japanese history in leading journals in the United States and Japan. He has taught Japanese history at a number of American and Japanese universities, most recently at Harvard, and is currently a professor in the Graduate School of Social Sciences at Hitotsubashi University in Tokyo.