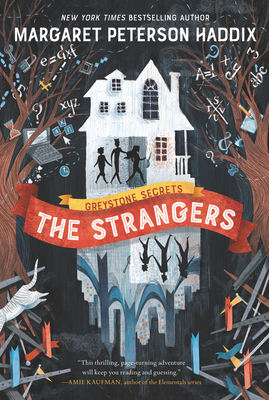 By  Margaret Peterson Haddix , Illustrated By  Anne Lambelet
Paperback
$ 8.99
On Our Shelves Now

New York Times bestselling author Margaret Peterson Haddix takes readers on a thrilling adventure filled with mysteries and plot twists aplenty in this absorbing series about family and friendships. Perfect for fans of A Wrinkle in Time and The City of Ember!

What makes you you?

The Greystone kids thought they knew. Chess has always been the protector over his younger siblings, Emma loves math, and Finn does what Finn does best—acting silly and being adored. They’ve been a happy family, just the three of them and their mom.

But everything changes when reports of three kidnapped children reach the Greystone kids, and they’re shocked by the startling similarities between themselves and these complete strangers. The other kids share their same first and middle names. They’re the same ages. They even have identical birthdays. Who, exactly, are these strangers?

Before Chess, Emma, and Finn can question their mom about it, she takes off on a sudden work trip and leaves them in the care of Ms. Morales and her daughter, Natalie. But puzzling clues left behind lead to complex codes, hidden rooms, and a dangerous secret that will turn their world upside down.

Praise for The Strangers:

Margaret Peterson Haddix grew up on a farm in Ohio. As a kid, she knew two girls who had the exact same first, middle, and last names and shared the same birthday—only one year apart—and she always thought that was bizarre.

As an adult, Haddix worked as a newspaper reporter and copy editor in Indiana before her first book, Running Out of Time, was published. She has since written more than forty books for kids and teens, including the Greystone Secrets series, the Shadow Children series, the Missing series, the Children of Exile series, and lots of stand-alones. Haddix and her husband, Doug, now live in Columbus, Ohio, where they raised their two kids. You can learn more about her at www.haddixbooks.com.