Mysteries of Trash and Treasure: The Secret Letters 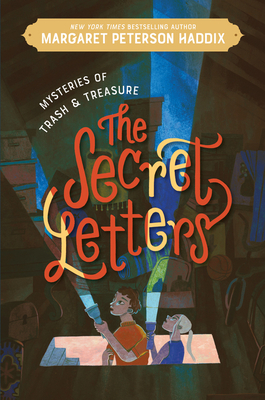 Mysteries of Trash and Treasure: The Secret Letters

By  Margaret Peterson Haddix
Hardcover
$ 17.99
Likely On Our Shelves

In this page-turning middle grade series by New York Times bestseller Margaret Peterson Haddix, Colin and Nevaeh, whose parents own rival junk-removal businesses, uncover mysteries hidden in attics and basements and discover how trash can become treasure. In The Secret Letters, Colin and Nevaeh find vintage letters that lead to interlocking mysteries from the 1970s and ‘80s, and they learn about “women’s lib,” the ERA, and other social issues from that time in history—and the way echoes from that era affect Colin and Nevaeh themselves.

When Colin finds a shoebox full of letters hidden in a stranger’s attic, he knows he’s supposed to throw them away. That’s his summer job, getting rid of junk. But Colin wants to rescue the letters--and find out what really happened to best friends Rosemary and Toby way back in the 1970s.

Meanwhile, across town, Nevaeh also finds a mysterious letter. But this one reads like a confession to a crime. And Nevaeh knows her father, the “Junk King,” expects her to join the rest of the family in blaming a single suspect: his business rival, Colin’s mom.

But that’s not what Nevaeh wants, either.

Even as one set of letters bring Colin and Nevaeh together, the one Nevaeh found threatens to tear them apart. Is their new friendship as doomed as Rosemary and Toby’s?

Each book in the Mysteries of Trash and Treasure series will examine a different time period in history and make readers think about how we value the stuff we hold on to—and what it is that makes it valuable.

Margaret Peterson Haddix grew up on a farm in Ohio. As a kid, she knew two girls who had the exact same first, middle, and last names and shared the same birthday—only one year apart—and she always thought that was bizarre.

As an adult, Haddix worked as a newspaper reporter and copy editor in Indiana before her first book, Running Out of Time, was published. She has since written more than forty books for kids and teens, including the Greystone Secrets series, the Shadow Children series, the Missing series, the Children of Exile series, and lots of stand-alones. Haddix and her husband, Doug, now live in Columbus, Ohio, where they raised their two kids. You can learn more about her at www.haddixbooks.com.