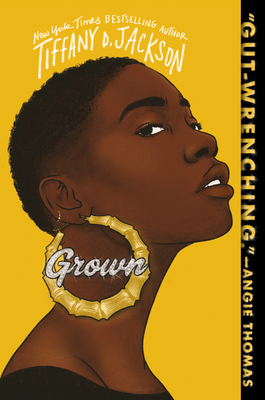 An instant New York Times bestseller! “Grown exposes the underbelly of a tough conversation, providing a searing examination of misogynoir, rape culture, and the vulnerability of young black girls. Groundbreaking, heart-wrenching, and essential reading for all in the #MeToo era.” —Dhonielle Clayton, New York Times bestselling author of The Belles

When legendary R&B artist Korey Fields spots Enchanted Jones at an audition, her dreams of being a famous singer take flight. Until Enchanted wakes up with blood on her hands and zero memory of the previous night. Who killed Korey Fields?

Before there was a dead body, Enchanted’s dreams had turned into a nightmare. Because behind Korey’s charm and star power was a controlling dark side. Now he’s dead, the police are at the door, and all signs point to Enchanted.

“Never have I read a story that so flawlessly hits the highest high and lowest low notes of Black girlhood in pursuit of the American Dream.” —Nic Stone, New York Times bestselling author of Dear Martin and Jackpot

Tiffany D. Jackson is the critically acclaimed author of Allegedly, Monday’s Not Coming, and Let Me Hear a Rhyme. A Walter Dean Myers Honor Book and Coretta Scott King–John Steptoe New Talent Award winner, she received her bachelor of arts in film from Howard University, earned her master of arts in media studies from the New School, and has over a decade in TV and film experience. The Brooklyn native still resides in the borough she loves. You can visit her at www.writeinbk.com.