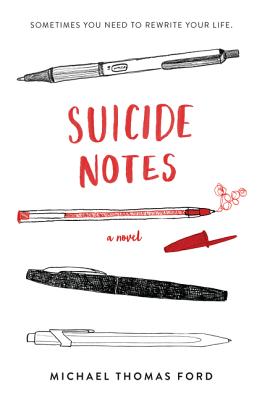 By  Michael Thomas Ford
Paperback
$ 12.99
Out of Stock In Store

An unforgettable coming of age novel for fans of 13 Reasons Why, It’s Kind of a Funny Story, and The Perks of Being a Wallflower.

Fifteen-year-old Jeff wakes up on New Year’s Day to find himself in the hospital—specifically, in the psychiatric ward.

Despite the bandages on his wrists, he’s positive this is all some huge mistake. Jeff is perfectly fine, perfectly normal; not like the other kids in the hospital with him.

But over the course of the next forty-five days, Jeff begins to understand why he ended up here—and realizes he has more in common with the other kids than he thought.

“With a sprinkling of dark humor and a full measure of humanness, Suicide Notes is quirky, surprising, and a riveting read.” —Ellen Hopkins, author of The You I’ve Never Known and Love Lies Beneath

“Like the very best teen novels, Suicide Notes is both classic and edgy, timeless and provocative.” —Brent Hartinger, author of Geography Club

Michael Thomas Ford is the author of the teen novels Suicide Notes and Love & Other Curses. His numerous other works for both adults and teens include some of the earliest books about the HIV/AIDS crisis and several books about the LGBTQ community. His novel Lily was a Tiptree Award long list title and a finalist for the Lambda Literary Award and the Shirley Jackson Award. He also authors a series of novellas starring some of the most popular contestants from RuPaul’s Drag Race, including Sharon Needles, Manila Luzon, and Jinkx Monsoon. He has a lot of tattoos and dogs and a beard.