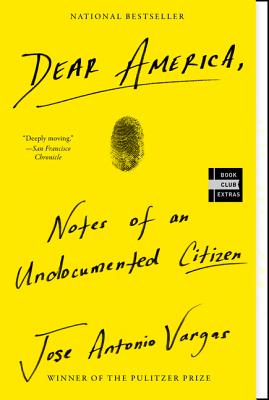 By  Jose Antonio Vargas
Paperback
$ 15.99
On Our Shelves Now

“This riveting, courageous memoir ought to be mandatory reading for every American.”  —Michelle Alexander, New York Times bestselling author of The New Jim Crow

“l cried reading this book, realizing more fully what my parents endured.” —Amy Tan, New York Times bestselling author of The Joy Luck Club and Where the Past Begins

“This book couldn’t be more timely and more necessary.” —Dave Eggers, New York Times bestselling author of What Is the What and The Monk of Mokha

Pulitzer-Prize winning journalist Jose Antonio Vargas, called “the most famous undocumented immigrant in America,” tackles one of the defining issues of our time in this explosive and deeply personal call to arms.

After 25 years of living illegally in a country that does not consider me one of its own, this book is the closest thing I have to freedom.”

Jose Antonio Vargas is a Pulitzer Prize-winning journalist, Emmy-nominated filmmaker, and Tony-nominated producer. His work has appeared internationally in Time magazine, as well as in the San Francisco Chronicle, The New Yorker, and the Washington Post. In 2014, he received the Freedom to Write Award from PEN Center USA. A leading voice for the human rights of immigrants, he founded the non-profit media and culture organization Define American, named one of the World’s Most Innovative Companies by Fast Company. An elementary school named after him will open in his hometown of Mountain View, California in 2019.