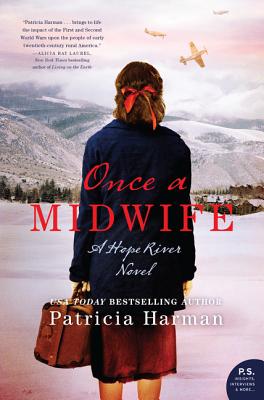 It's "Call the Midwife" set in the U.S. homefront during World War II.  If you loved Patricia Harman's Midwife of Hope River you'll love Once a Midwife!

The women of Hope River trust midwife Patience Hester, whose skill in delivering babies is known for miles around. But though the Great Depression is behind them, troubles are not, for Europe is at war…and it can only be a matter of time before the U.S. enters the fray.

And while some are eager to join the fight, Patience’s husband, Daniel, is not. Daniel is a patriot—but he saw too much bloodshed during the First World War, and has vowed never to take up arms again.

His stance leaves Patience and their four children vulnerable—to the neighbors who might judge them, and to the government, who imprison Daniel for his beliefs.

Patience must support their family and fight for her husband’s release despite her own misgivings. And with need greater than ever, she must also keep her practice running during this tumultuous time…relying on generous friends, like Bitsy, who has returned to Hope River, stalwart neighbors, and her own indomitable strength to see them all through.

Patricia Harman, CNM, got her start as a lay midwife on rural communes and went on to become a nurse-midwife on the faculties of Ohio State University, Case Western Reserve University, and West Virginia University. She is the author of two acclaimed memoirs and three novels: the bestselling The Midwife of Hope River, The Reluctant Midwife and The Runaway Midwife. She has three sons and lives near Morgantown, West Virginia.