Better Luck Next Time: A Novel 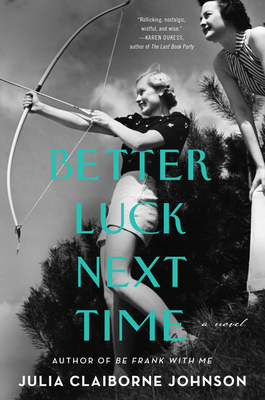 Better Luck Next Time: A Novel

By  Julia Claiborne Johnson
Paperback
$ 16.99
Out of Stock In Store

“Doesn’t a romantic comedy set on a 1930s Nevada dude ranch teeming with about-to-be-divorced women owe a certain debt to the era’s big-screen classics? Then again, it’s hard to believe a cinematic version could be any more fun.” — New York Times Book Review

The dazzling second novel from the bestselling author of Be Frank with Me, a charming story of endings, new beginnings, and the complexities and complications of friendship and love, set in late 1930s Reno.

It’s 1938 and women seeking a quick, no-questions split from their husbands head to the “divorce capital of the world,” Reno, Nevada. There’s one catch: they have to wait six-weeks to become “residents.” Many of these wealthy, soon-to-be divorcees flock to the Flying Leap, a dude ranch that caters to their every need.

Twenty-four-year-old Ward spent one year at Yale before his family lost everything in the Great Depression; now he’s earning an honest living as a ranch hand at the Flying Leap. Admired for his dashing good looks—“Cary Grant in cowboy boots”—Ward thinks he’s got the Flying Leap’s clients all figured out. But two new guests are about to upend everything he thinks he knows: Nina, a St Louis heiress and amateur pilot back for her third divorce, and Emily, whose bravest moment in life was leaving her cheating husband back in San Francisco and driving herself to Reno.

A novel about divorce, marriage, and everything that comes in between (money, class, ambition, and opportunity), Better Luck Next Time is a hilarious yet poignant examination of the ways friendship can save us, love can destroy us, and the family we create can be stronger than the family we come from.

Julia Claiborne Johnson is the author of the bestselling Be Frank with Me, a finalist for the American Bookseller’s Association Best Debut Novel Award. She grew up on a farm in Tennessee before moving to New York City, where she worked at Mademoiselle and Glamour magazines. She now lives in Los Angeles with her comedy-writer husband and their two children.