The Blade Between: A Novel 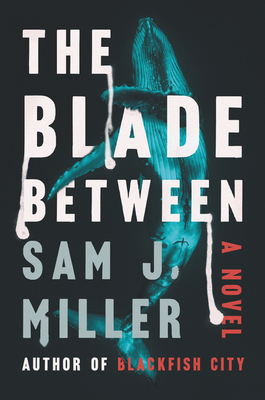 The Blade Between: A Novel

A Recommended Book from CrimeReads and Alma

From Nebula Award winner Sam J. Miller comes a frightening and uncanny ghost story about a rapidly changing city in upstate New York and the mysterious forces that threaten it.

Ronan Szepessy promised himself he’d never return to Hudson. The sleepy upstate town was no place for a restless gay photographer. But his father is ill and New York City’s distractions have become too much for him. He hopes that a quick visit will help him recharge.

Ronan reconnects with two friends from high school: Dom, his first love, and Dom’s wife, Attalah. The three former misfits mourn what their town has become—overrun by gentrifiers and corporate interests. With friends and neighbors getting evicted en masse and a mayoral election coming up, Ronan and Attalah craft a plan to rattle the newcomers and expose their true motives. But in doing so, they unleash something far more mysterious and uncontainable.

Hudson has a rich, proud history and, it turns out, the real-state developers aren’t the only forces threatening its well-being: the spirits undergirding this once-thriving industrial town are enraged. Ronan’s hijinks have overlapped with a bubbling up of hate and violence among friends and neighbors, and everything is spiraling out of control. Ronan must summon the very best of himself to shed his own demons and save the city he once loathed.

Sam J. Miller is the Nebula Award–winning author of The Art of Starving (an NPR best book of the year) and Blackfish City (a Nebula Award finalist and a John W. Campbell Award winner). Sam is a recipient of the Shirley Jackson Award and a graduate of the Clarion Workshop. His short stories have been nominated for the World Fantasy, Theodore Sturgeon, and Locus Awards, and reprinted in dozens of anthologies. He lives in New York City.