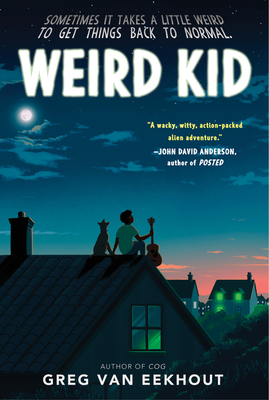 By  Greg van Eekhout
Paperback
$ 7.99
Pre-Order (Not Yet Published)

From the author of Cog and Voyage of the Dogs, Weird Kid is a hilarious and heartfelt homage to everyone who feels like they don’t belong. Perfect for fans of Gordon Korman and Stuart Gibbs.

Jake Wind is trying to stay under the radar. Whose radar? Anyone who might be too interested in the fact that he has shapeshifting abilities he can’t control. Or that his parents found him as a ball of goo when he was a baby.

Keeping his powers in check is crucial, though, if he wants to live a normal life and go to middle school instead of being homeschooled (and if he wants to avoid being kidnapped and experimented on, of course).

Things feel like they’re going his way when he survives his first day of school without transforming and makes a new friend. But when mysterious sinkholes start popping up around town—sinkholes filled with the same extraterrestrial substance as Jake—and his neighbors, classmates, and even his family start acting a little, well, weird, Jake will have to learn to use his powers in order to save his town.

"The short page count, humor, and action make this a good choice for reluctant readers. A solid purchase for school and public libraries." —School Library Journal

Greg van Eekhout lives in San Diego, California, with his astronomy/physics professor wife and two dogs. He’s worked as an educational software developer, ice-cream scooper, part-time college instructor, and telemarketer. Being a writer is the only job he’s ever actually liked. You can find more about Greg at his website: www.writingandsnacks.com.