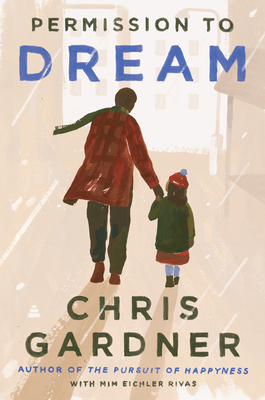 By  Chris Gardner , Mim Eichler Rivas
Hardcover
$ 24.99
Out of Stock In Store (Click to Order)

In the spirit of The Last Lecture, The Secret, and The Alchemist, this small book presents BIG ideas for turning your “one day” into today, including the generational transfer of a dream and a powerful blueprint for a masterpiece life—from the author of the New York Times bestselling memoir and major motion picture The Pursuit of Happyness.

On a winter’s day, Chris Gardner set off with his nine-year-old granddaughter Brooke to find the harmonica of her dreams. The search sends them North “beyond the wall” into a foreboding Chicago neighborhood and, soon, on a harrowing adventure that will change both of their lives—and ours.

Chris is still mourning the loss of his girlfriend to brain cancer. Her question haunts him: “Now that we know how short life can be, what will you do with the time you have left?” After five years, he feels an urgency—what he calls, “Atomic Time” in which every second counts—to find an answer, but is stuck. Even while giving Brooke permission to aspire to one day become President of the United States, he knows it’s time to reclaim his own permission to dream.

Lost, Chris and his granddaughter board a bus, reminding him of earlier rides through dark times when dreams of a better life kept him alive. As the two wind through a changing cityscape, Chris reflects on past lessons that offer powerful guidance for dreaming your way to monumental success.

At its heart, this book lays out a blueprint for building a dream-come-true life—even during uncertainty. Gardner delivers the secrets to achieving a prosperous career—from a method for identifying your ultimate dream to a playbook for becoming world class at it.  His tools include the “new 3 R’s”—or the Rep, the Rap and the Rolodex—which reveal how to earn a stellar reputation, develop a rap for marketing yourself, and amass a Rolodex of rewarding relationships. No matter how much wealth you achieve, Chris notes, true success comes from enriching the lives of others—so all can still have access to the American Dream.

Toward the end, Brooke observes that in Atomic Time it’s never too late for anyone to reinvent themselves and change their fortune. Chris, hearing her, realizes what his next pursuit will be—to go back to high school and give permission to dream to the next generation of problem solvers and change makers.

A true fable, Permission to Dream is a timeless and timely manifesto for turning dreams into action—beginning right now.

Chris Gardner is the Chief Executive of Gardner Rich & Company, a multimillion-dollar brokerage with offices in New York, Chicago, and San Francisco. An avid philanthropist and motivational speaker, Gardner is committed to many organizations—particularly those related to education—and was recently the recipient of the “Father of the Year Award” from the National Fatherhood Initiative. A Milwaukee native, Gardner has two children and resides in Chicago and New York.

Mim Eichler-Rivas is coauthor with Chris Gardner of the #1 New York Times bestseller The Pursuit of Happyness. Mim’s list of more than thirty acclaimed coauthorships includes the national bestseller Finding Fish with Antwone Fisher. Mim’s solo title, Beautiful Jim Key, has sold briskly for more than a dozen years and has a feature film in the works.