Breaking the Age Code: How Your Beliefs About Aging Determine How Long and Well You Live 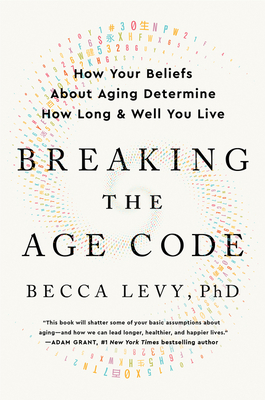 Breaking the Age Code: How Your Beliefs About Aging Determine How Long and Well You Live

Yale professor and leading expert on the psychology of successful aging, Dr. Becca Levy, draws on her ground-breaking research to show how age beliefs can be improved so they benefit all aspects of the aging process, including the way genes operate and the extension of life expectancy by 7.5 years.

The often-surprising results of Levy’s science offer stunning revelations about the mind-body connection. She demonstrates that many health problems formerly considered to be entirely due to the aging process, such as memory loss, hearing decline, and cardiovascular events, are instead influenced by the negative age beliefs that dominate in the US and other ageist countries. It’s time for all of us to rethink aging and Breaking the Age Code shows us how to do just that.

Based on her innovative research, stories that range from pop culture to the corporate boardroom, and her own life, Levy shows how age beliefs shape all aspects of our lives. She also presents a variety of fascinating people who have benefited from positive age beliefs as well as an entire town that has flourished with these beliefs.

Breaking the Age Code is a landmark work, presenting not only easy-to-follow techniques for improving age beliefs so they can contribute to successful aging, but also a blueprint to reduce structural ageism for lasting change and an age-just society.

Dr. Becca Levy, the leading authority on how beliefs about aging influence aging health, is Professor of Epidemiology at the Yale School of Public Health and Professor of Psychology at Yale University. Her pathfinding studies have changed the way we think about aging and have received awards from the American Psychological Association, the Gerontological Society of America, and the International Association of Gerontology and Geriatrics. Dr. Levy has given invited testimony before the US Senate on the adverse effects of ageism and has contributed to US Supreme Court briefs to fight age-discrimination. She serves as a scientific advisor to the World Health Organization’s Campaign to Combat Ageism.