Life on the Line: Young Doctors Come of Age in a Pandemic 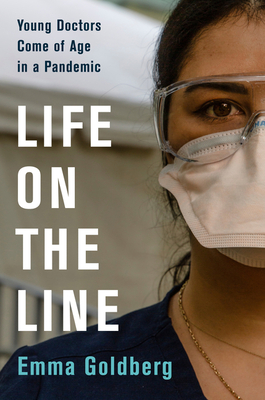 Life on the Line: Young Doctors Come of Age in a Pandemic

By  Emma Goldberg
Hardcover
$ 27.99
Out of Stock In Store (Available to Order)

The gripping account of six young doctors enlisted to fight COVID-19, an engrossing, eye-opening book in the tradition of both Sheri Fink’s Five Days at Memorial and Scott Turow’s One L.

In March 2020, soon-to-graduate medical students in New York City were nervously awaiting “match day” when they would learn where they would begin their residencies. Only a week later, these young physicians learned that they would be sent to the front lines of the desperate battle to save lives as the coronavirus plunged the city into crisis.

Taking the Hippocratic Oath via Zoom, these new doctors were sent into iconic New York hospitals including Bellevue and Montefiore, the epicenters of the epicenter.  In this powerful book, New York Times journalist Emma Goldberg offers an up-close portrait of six bright yet inexperienced health professionals, each of whom defies a stereotype about who gets to don a doctor’s white coat. Goldberg illuminates how the pandemic redefines what it means for them to undergo this trial by fire as caregivers, colleagues, classmates, friends, romantic partners and concerned family members.

Woven together from in-depth interviews with the doctors, their notes, and Goldberg’s own extensive reporting, this page-turning narrative is an unforgettable depiction of a crisis unfolding in real time and a timeless and unique chronicle of the rite of passage of young doctors.

Emma Goldberg is a reporter at the New York Times, writing for sections such as Health and Science, Styles, Gender, National, and Culture, among others. Her cover stories have featured campus techlash, surgeon moms, young women running for office, and low-income medical students. Since the start of the coronavirus outbreak, she has turned her focus to the lives of students, physicians, and nurses battling the pandemic. She is the winner of the Newswomen’s Club of New York Best New Journalist Award and the Sidney Hillman Foundation’s Sidney Award. Goldberg received her BA at Yale and MPhil at Cambridge University.