Viscount Who Loved Me: Bridgerton (Bridgertons #2) 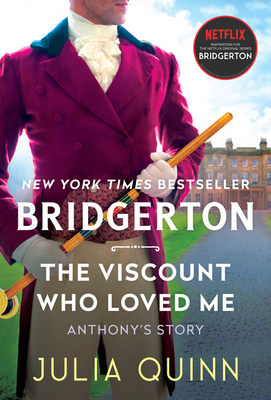 Viscount Who Loved Me: Bridgerton (Bridgertons #2)

By  Julia Quinn
Mass Market
$ 9.99
Likely On Our Shelves

The inspiration for season two of BRIDGERTON, a series created by Shondaland for Netflix, from #1 New York Times bestselling author Julia Quinn: the story of Anthony Bridgerton in the second of her beloved Regency-set novels featuring the charming, powerful Bridgerton family.

Contrary to popular belief, Kate is quite sure that reformed rakes do not make the best husbands—and Anthony Bridgerton is the most wicked rogue of them all. Kate’s determined to protect her sister—but she fears her own heart is vulnerable. And when Anthony’s lips touch hers, she’s suddenly afraid she might not be able to resist the reprehensible rake herself...

This novel includes the 2nd epilogue, a peek at the story after the story.

#1 New York Times bestselling author JULIA QUINN began writing one month after graduating from college and, aside from a brief stint in medical school, she has been tapping away at her keyboard ever since. Her novels have been translated into 43 languages and are beloved the world over. A graduate of Harvard and Radcliffe Colleges, she lives with her family in the Pacific Northwest.

Look for BRIDGERTON, based on her popular series of novels about the Bridgerton family, on Netflix.