The Boy Who Followed His Father into Auschwitz: A True Story Retold for Young Readers 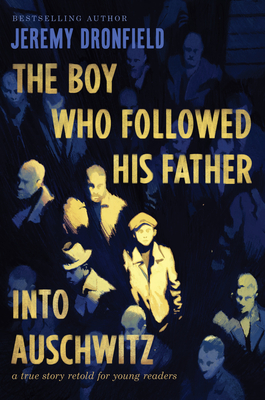 The Boy Who Followed His Father into Auschwitz: A True Story Retold for Young Readers

By  Jeremy Dronfield
Hardcover
$ 17.99
Likely On Our Shelves

This powerful, moving middle grade adaptation of the adult international bestselling narrative nonfiction book The Boy Who Followed His Father into Auschwitz shines a light on the true story of two brothers who experienced the atrocities of the Holocaust in very different ways.

Fritz Kleinmann was fourteen when the Nazis took over Vienna. Kurt, his little brother, was eight. Under Hitler’s brutal regime, their Austrian-Jewish family of six was cruelly torn apart.

Taken to Buchenwald concentration camp, Fritz and his Papa, Gustav, underwent hard labor and starvation. Meanwhile, Kurt made the difficult voyage, all alone, to America, to escape the war.

When Papa was ordered to the infamous Auschwitz concentration camp, Fritz—desperate not to lose his beloved father—insisted he must go too. Together, they endured countless atrocities to survive.

Jeremy Dronfield authentically and accurately captures this family tale of bravery, love, hope, and survival with the help of extensive research and primary sources like Gustav’s diary and interviews with family members. Maps, black-and-white photos, a timeline of events, a glossary, and more are included.

Jeremy Dronfield is a biographer, historian, novelist and former archaeologist. He is the author of the forthcoming middle-grade narrative nonfiction book The Boy Who Followed His Father into Auschwitz: A Story Retold, and his recent adult nonfiction titles include Dr. James Barry: A Woman Ahead of Her Time, a Sunday Times Book of the Year. He lives in England.