The World Keeps Ending, and the World Goes On 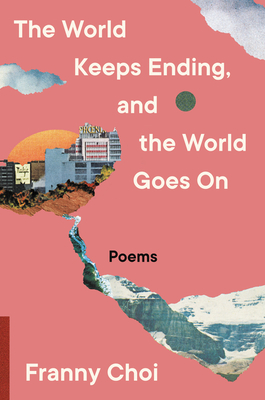 The World Keeps Ending, and the World Goes On

By  Franny Choi
Hardcover
$ 25.99
Likely On Our Shelves

From acclaimed poet Franny Choi comes a poetry collection for the ends of worlds—past, present, and future. Choi’s third book features poems about historical and impending apocalypses, alongside musings on our responsibilities to each other and visions for our collective survival.

Many have called our time dystopian. But The World Keeps Ending, and the World Goes On reminds us that apocalypse has already come in myriad ways for marginalized peoples.

With lyric and tonal dexterity, these poems spin backwards and forwards in time--from Korean comfort women during World War II, to the precipice of climate crisis, to children wandering a museum in the future. These poems explore narrative distances and queer linearity, investigating on microscopic scales before soaring towards the universal. As she wrestles with the daily griefs and distances of this apocalyptic world, Choi also imagines what togetherness--between Black and Asian and other marginalized communities, between living organisms, between children of calamity and conquest--could look like. Bringing together Choi's signature speculative imagination with even greater musicality than her previous work, The World Keeps Ending, and the World Goes On ultimately charts new paths toward hope in the aftermaths, and visions for our collective survival.

Franny Choi is the author of two previous poetry collections, Soft Science (Alice James Books, 2019) and Floating, Brilliant, Gone (Write Bloody Publishing, 2014). Her poems have appeared in the New York Times, the Nation, the Paris Review, and elsewhere. They are Faculty in Literature at Bennington College and founded Brew & Forge, a project that aims to build connections between writers, artists, and organizers.