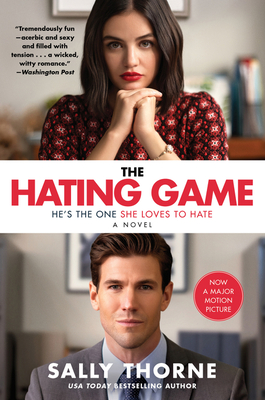 Lucy Hutton has always believed that the nice girl can get the corner office. She’s charming and accommodating and prides herself on being loved by everyone. Everyone except sarcastic, cynical, and intimidating Joshua Templeman. Her nemesis.

Josh is the dark and brooding to Lucy’s light and cheery, the crisp pressed suit to her retro outfits and bright red lipstick. And he gets under her skin like no one else can. Trapped in a shared office together five days a week, they’ve become entrenched in an addictive, never-ending game of one-upmanship.

When a new executive position is announced, Josh and Lucy are top contenders for the promotion, but the idea of working for the other is so unthinkable that they strike a deal: whoever doesn’t get the job will walk away. The stakes have never been higher and as the competition heats up and the barriers between them begin to fall down, Lucy starts questioning just who her opponent truly is and whether this man she’s hated all this time is even the real Josh.

Sally Thorne is the USA Today-bestselling author of The Hating Game. She spends her days climbing into fictional worlds of her own creation. She lives in Canberra, Australia with her husband in a house filled with vintage toys, too many cushions, a haunted dollhouse and the world’s sweetest pug.