Stick and Rudder: An Explanation of the Art of Flying 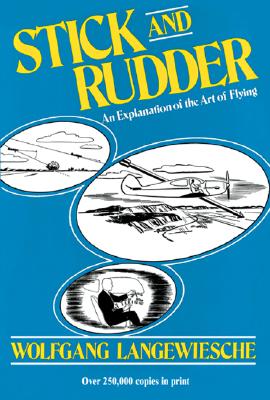 Stick and Rudder: An Explanation of the Art of Flying

By  Wolfgang Langewiesche
$ 29.00
Out of Stock In Store (Available to Order)

Publisher's Note: Products purchased from Third Party sellers are not guaranteed by the publisher for quality, authenticity, or access to any online entitlements included with the product.

WHAT'S IN STICK AND RUDDER:

Stick and Rudder is the first exact analysis of the art of flying ever attempted. It has been continously in print for thirty-three years. It shows precisely what the pilot does when he flies, just how he does it, and why.

Because the basics are largely unchanging, the book therefore is applicable to large airplanes and small, old airplanes and new, and is of interest not only to the learner but also to the accomplished pilot and to the instructor himself.

When Stick and Rudder first came out, some of its contents were considered highly controversial. In recent years its formulations have become widely accepted. Pilots and flight instructors have found that the book works.

Today several excellent manuals offer the pilot accurate and valuable technical information. But Stick and Rudder remains the leading think-book on the art of flying. One thorough reading of it is the equivalent of many hours of practice.

Wolfgang Langewiesche first soloed in 1934 in Chicago. Early in his flying he was struck by a strange discrepancy: in piloting, the words and the realities did not agree. What pilots claimed to be doing in flying an airplane, was not what they did in practice. Langewiesche set himself the task of describing more accurately and realistically what the pilot really does when he flies. The first result was a series of articles in Air Facts, analyzing various points of piloting technique. In 1944 Stick and Rudder was published.