The Art of War: The Essential Translation of the Classic Book of Life (Penguin Classics Deluxe Edition) 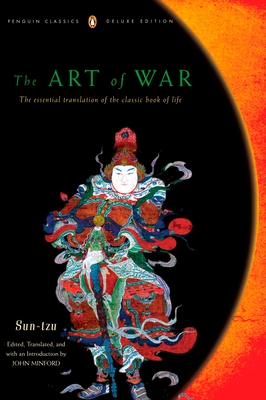 The Art of War: The Essential Translation of the Classic Book of Life (Penguin Classics Deluxe Edition)

A stunning Penguin Classics Deluxe Edition of the world's most famous military treatise, by the award-winning translator of the Tao Te Ching and the I Ching

For more than two thousand years, Sun-tzu's The Art of War has provided leaders with essential advice on battlefield tactics and management strategies. An elemental part of Chinese culture, it has also become a touchstone for the Western struggle for survival and success, whether in battle, in business, or in relationships. Now, in this crisp, accessible translation, eminent scholar John Minford brings this seminal work to life for today's readers. Capturing the literary quality of the work, Minford presents the core text in two formats: first, the unadorned ancient words of wisdom ascribed to Sun-tzu; then, the same text with extensive running commentary from the canon of traditional Chinese commentators. A lively, learned introduction and other valuable apparatus round out this authoritative volume.

For more than seventy years, Penguin has been the leading publisher of classic literature in the English-speaking world. With more than 1,800 titles, Penguin Classics represents a global bookshelf of the best works throughout history and across genres and disciplines. Readers trust the series to provide authoritative texts enhanced by introductions and notes by distinguished scholars and contemporary authors, as well as up-to-date translations by award-winning translators.

Little is known about Sun-tzu (544-496 B.C.) and his life during the Warring States period after the decline of the Zhou dynasty, but his classic work, The Art of War, has been one of the central works of Chinese literature for 2500 years.

John Minford (editor/translator) is the award-winning translator of the Viking Penguin editions of the Tao Te Ching and the I Ching and an emeritus professor of Chinese at the Australian National University.