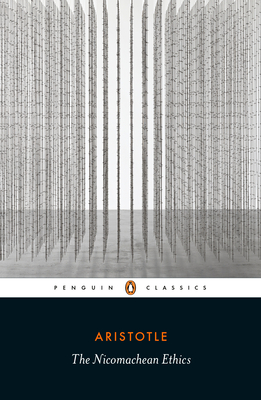 By  Aristotle , Translated by  Adam Beresford
$ 17.00
Likely On Our Shelves

Aristotle’s classic treatise is based on his famous doctrine of the golden mean, which advocates taking the middle course between excess and deficiency. Reacting against Plato’s absolutism, Aristotle insisted that there are no definitive moral standards and that ethical philosophy must be based on human nature and experience.

Treating such topics as moral worth, intellectual virtue, pleasure, friendship, and happiness, The Nicomachean Ethics asks above all: What is the good life, and how can we live it?

Aristotle (384–322 BC) was born in the Macedonian city of Stagira. He studied in Plato’s Academy in Athens and later became tutor to Alexander the Great before establishing his own school in Athens, called the Lyceum. His writings, which were of extraordinary range, profoundly affected the whole course of ancient, medieval, and modern philosophy. Many of them have survived, including The Nicomachean Ethics, Politics, and Poetics, among others.

Adam Beresford (translator) is an associate professor of philosophy at the University of Massachusetts, Boston. He previously translated Plato’s Protagoras and Meno for Penguin Classics.