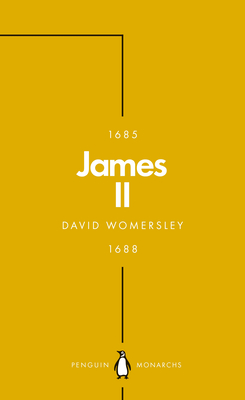 SPECTATOR AND TELEGRAPH BOOKS OF THE YEAR 2015

The short, action-packed reign of James II (1685-88) is generally seen as one of the most catastrophic in British history. James managed, despite having access to tremendous reserves of good will and deference, to so alienate his supporters that he had to flee for his life. And yet, most of that life was spent not as king but first as heir to Charles II, as Duke of York (after whom New York is named) and then in the last part of his life as the first Jacobite 'Pretender', starting a problem that would haunt Britain's rulers for generations.

David Womersley is the Thomas Warton Professor of Literature at the University of Oxford. Among his interests are Jonathan Swift (he was the general editor of the CUP edition of Swift), Daniel Defoe and Edward Gibbon, whose Decline and Fall of the Roman Empire he edited for Penguin Classics.