A Countess Below Stairs 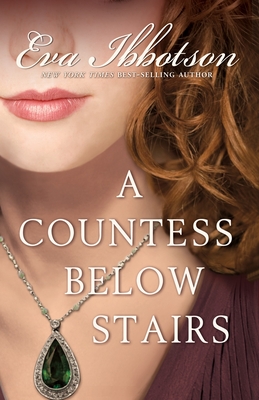 A Countess Below Stairs

A delicious historical romance perfect for fans of Downton Abbey and Upstairs, Downstairs

After the Russian Revolution turns her world topsy-turvy, Anna, a young Russian countess, has no choice but to flee to England. penniless, Anna hides her aristocratic background and takes a job as servant in the household of the esteemed Westerholme family, armed only with an outdated housekeeping manual and sheer determination. Desperate to keep her past a secret, Anna is nearly overwhelmed by her new duties--not to mention her instant attraction to Rupert, the handsome Earl of Westerholme. to make matters worse, Rupert appears to be falling for her as well. As their attraction grows stronger, Anna finds it more and more difficult to keep her most dearly held secrets from unraveling. And then there's the small matter of Rupert's beautiful and nasty fiancee. . . .

Eva Ibbotson, born Maria Charlotte Michelle Wiesner (21 January 1925 – 20 October 2010), was an Austrian-born British novelist, known for her children's books. Some of her novels for adults have been successfully reissued for the young adult market in recent years. For the historical novel Journey to the River Sea (Macmillan, 2001), she won the Smarties Prize in category 9–11 years, garnered unusual commendation as runner up for the Guardian Prize, and made the Carnegie, Whitbread, and Blue Peter shortlists. She was a finalist for the 2010 Guardian Prize at the time of her death. Her last book, The Abominables, was one of eight books on the longlist for the same award in 2012.


The following interview appeared in the Fall 2001 Preview Magazine

Do you have any rituals?

I can write anywhere if I have to because I still use a pen and paper -, but when I am at home I go to the old carved desk I inherited from my mother who was a writer too, and told some fantastic stories. The morning is best for ideas, and I have to be wearing warm clothes because when I am thinking hard I get cold. And I have to have a waste paper basket handy for all the pages that have gone wrong.

I don't really share my work until it is published, I feel too uncomfortable about unfinished work.

When did you know you wanted to be a writer?

I don't think I ever knew, it just happened. One day I wrote `author' in my passport and that was that..

What were you doing when you found out that your first book was going to be published?

Cooking supper for my husband and children. My agent phoned and I shouted and we all danced about, except my husband who saw to it that the sauce did not burn.

What did you treat yourself to when you found out that your first book was accepted for publication?

My first money as a writer came from a short story in a magazine. It was a very small sum, and I bought Mars Bars for everybody in the family.

What was the first book you remember reading as a child? Did you have a favorite book as a child?

I don't remember the name of my first book, but I know it had a picture of very bright berries, green and red in a forest- and people lived inside the berries... Perhaps that's where my passion for forests comes from!

Do you read reviews of your own work?

Yes, when I am sent them, but I don't go out and look.

What’s the best question a teen has asked about your writing?

I don't know what the best question is, but by far the most common is `Where do you get your ideas from?' - and the answer to that is very difficult (and therefore interesting).

What are you reading right now?

The Wizard of Earthsea, by Ursula Le Guin.

Susan, your editor, tells me Journey to the River Sea is a book you've wanted to write for years. How did the idea first come to you?

Journey to the River Sea was written quite quickly but it spent years and years inside my head. It started with my hearing about this fabled opera house a thousand miles from the mouth of the Amazon and I thought it was one of the strangest things I had ever heard - I meant to go there and see for myself but then I realised it would mean going back into the past because everything is quite different there now. So I went on reading and dreaming and researching and then one day, I picked up my pen to start a new book about witches and ghosts and found I had started to write an adventure story set in the jungle.