The Case of the Bizarre Bouquets: An Enola Holmes Mystery 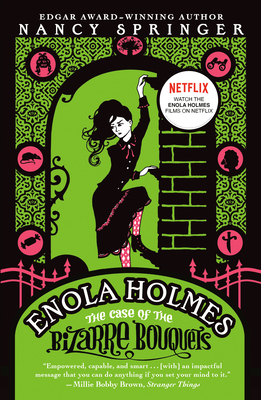 The Case of the Bizarre Bouquets: An Enola Holmes Mystery

By  Nancy Springer
Paperback
$ 6.99
On Our Shelves Now

Enola Holmes--younger sister to Sherlock Holmes--is back on another case!

Everyone knows Dr. Watson is Sherlock Holmes's right-hand man, so when he goes missing, it's a shock. Even Sherlock hasn't the slightest clue as to where he could be. Enola is intrigued but wary; she's still hiding from her older brothers, and getting involved could prove to be disastrous. But Enola can't help but investigate, especially when she learns that a bizarre bouquet--with flowers all symbolizing death--has been delivered to the Watson residence. Enola knows she must act quickly, but can she find Dr. Watson in time?


Praise for Enola Holmes: The Case of the Missing Marquess:

"Empowered, capable, and smart . . . [with] an impactful message that you can do anything if you set your mind to it."--Millie Bobby Brown, Stranger Things

* "This is a terrific package. Springer not only provides two fine mysteries, breathtaking adventure, and key-eyed description, but she also offers a worthy heroine." --Booklist, starred review

Nancy Springer has published forty novels for adults, young adults and children. In a career beginning shortly after she graduated from Gettysburg College in 1970, Springer wrote for ten years in the imaginary realms of mythological fantasy, then ventured on contemporary fantasy, magical realism, and women's fiction before turning her attention to children's literature. Her novels and stories for middle-grade and young adults range from contemporary realism, mystery/crime, and fantasy to her critically acclaimed novels based on the Arthurian mythos, I AM MORDRED: A TALE OF CAMELOT and I AM MORGAN LE FAY. Springer's children's books have won her two Edgar Allan Poe awards, a Carolyn W. Field award, various Children's Choice honors and numerous ALA Best Book listings. Her most recent series include the Tales of Rowan Hood, featuring Robin Hood’s daughter, and the Enola Holmes mysteries, starring the much younger sister of Sherlock Holmes.