The Sky Is Everywhere 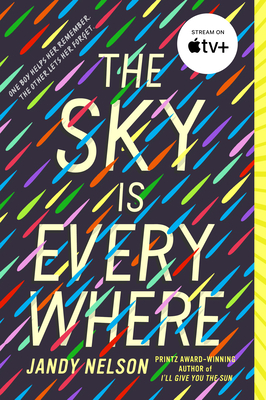 The Sky Is Everywhere

By  Jandy Nelson
Paperback
$ 9.99
Likely On Our Shelves

“Both a profound meditation on loss and grieving and an exhilarating and very sexy romance." —NPR

Adrift after her sister Bailey’s sudden death, Lennie finds herself torn between quiet, seductive Toby—Bailey’s boyfriend who shares Lennie’s grief—and Joe, the new boy in town who bursts with life and musical genius. Each offers Lennie something she desperately needs. One boy helps her remember. The other lets her forget. And she knows if the two of them collide, her whole world will explode.

As much a laugh-out-loud celebration of love as a nuanced and poignant portrait of loss, Len­nie’s struggle to sort her own melody out out the noise around her makes for an always honest, often uproarious, and absolutely unforgettable read.

Jandy Nelson is the New York Times bestselling author of I’ll Give You the Sun, which received the prestigious Printz Award and was a Stonewall Honor Book. Her critically acclaimed debut, The Sky Is Everywhere, is now an AppleTV+ and A24 original film for which Jandy wrote the screenplay. Together, Sun and Sky have sold over a million copies worldwide. Both have been YALSA Best Fiction for Young Adults picks and on multiple best of the year lists, have earned many starred reviews, and continue to enjoy international success. Currently a full-time writer, Jandy lives and writes in San Francisco, California, not far from the settings of her novels.