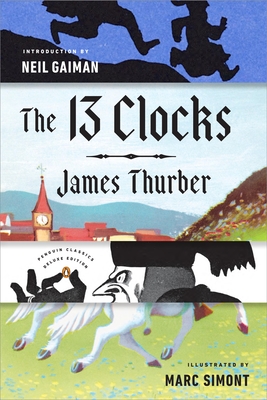 By  James Thurber , Introduction by  Neil Gaiman , Illustrated By  Marc Simont
Paperback
$ 16.00
Likely On Our Shelves

A giant of American humor makes his Penguin Classics debut with “probably the best book in the world” (Neil Gaiman, from the Introduction), in a stunning Deluxe Edition featuring the original, full-color illustrations

The hands of all thirteen clocks stand still in the gloomy castle on a lonely hill where a wicked Duke lives with his niece, the beautiful Princess Saralinda. The Duke fancies he has frozen time, for he is afraid that one day a Prince may come and win away the hand of the Princess—the only warm hand in the castle. To thwart that fate, he sets impossible tasks for Saralinda’s suitors. But when the bold Prince Zorn of Zorna arrives, disguised as a wandering minstrel, and helped by the enigmatic Golux, the cold Duke may at last have met his match.

Since it was first published in 1950, James Thurber’s sublimely whimsical fairy tale of love forestalled but ultimately fulfilled has delighted readers of all ages. It is published here with Marc Simont’s enchanting, full-color illustrations from the first edition.

James Thurber (1894–1961) was one of the preeminent American humorists and cartoonists of the twentieth century. Most famous for his widely anthologized short story “The Secret Life of Walter Mitty,” he was a contributor to The New Yorker for more than thirty years and wrote nearly forty books—collections of essays, short stories, fables, and children’s stories, including The Wonderful O and the Caldecott Medal winner Many Moons.

Marc Simont (illustrations; 1915–2013) illustrated nearly a hundred books, among them James Thurber's The Wonderful O and a 1990 edition of Thurber's Many Moons. He worked with such authors as Marjorie Weinman Sharmat (on the Nate the Great series) and Margaret Wise Brown and won both a Caldecott Honor and a Caldecott Medal for his illustrations of children’s books.

Neil Gaiman (introduction) is the #1 New York Times bestselling author of more than twenty books for readers of all ages, including American Gods, The Ocean at the End of the Lane, The Graveyard Book, Coraline, and the Sandman series of graphic novels. He is Professor in the Arts at Bard College.