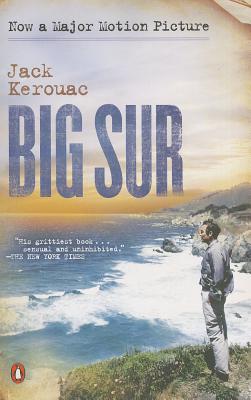 Soon to be a major motion picture starring Kate Bosworth, Josh Lucas, Anthony Edwards, and Radha Mitchell
"Each book by Jack Kerouac is unique, a telepathic diamond. With prose set in the middle of his mind, he reveals consciousness itself in all its syntatic elaboration, detailing the luminous emptiness of his own paranoiac confusion. Such rich natural writing is nonpareil in later half XX century, a synthesis of Proust, Celine, Thomas Wolfe, Hemingway, Genet, Thelonius Monk, Basho, Charlie Parker, and Kerouac's own athletic sacred insight.

"Big Sur's humane, precise account of the extraordinary ravages of alcohol delirium tremens on Kerouac, a suerior novelist who had strength to complete his poetic narrative, a task few scribes so afflicted have accomplished others crack up. Here we meet San Francisco's poets & recognize hero Dean Moriarty ten years after On the Road. Jack Kerouac was a 'writer, ' as his great peer W.S. Burroughs says, and here at the peak of his suffering humorous genius he wrote through his misery to end with 'Sea, ' a brilliant poem appended, on the hallucinatory Sounds of the Pacific Ocean at Big Sur." Allen Ginsberg

Jack Kerouac (1922-1969), the central figure of the Beat Generation, was born in Lowell, Massachusetts, in 1922 and died in St. Petersburg, Florida, in 1969. Among his many novels are On the Road, The Dharma Bums, Big Sur, and Visions of Cody.