The Things You Can See Only When You Slow Down: How to Be Calm in a Busy World 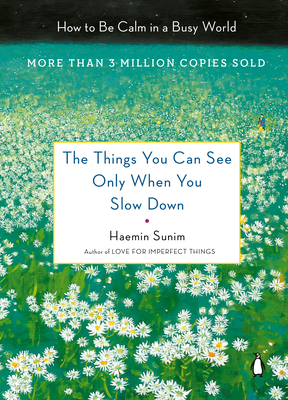 The Things You Can See Only When You Slow Down: How to Be Calm in a Busy World

By  Haemin Sunim , Translated by  Chi-Young Kim , Haemin Sunim , Illustrated By  Youngcheol Lee
Hardcover
$ 22.00
Out of Stock In Store (Available to Order)

The multimillion-copy bestselling book of spiritual wisdom about the importance of slowing down in our fast-paced world, by the Buddhist author of Love for Imperfect Things

“Wise advice on how to reflect and slow down.” —Elle

Is it the world that’s busy, or is it my mind?

The world moves fast, but that doesn’t mean we have to. This bestselling mindfulness guide by Haemin Sunim (which means “spontaneous wisdom”), a renowned Buddhist meditation teacher born in Korea and educated in the United States, illuminates a path to inner peace and balance amid the overwhelming demands of everyday life.

By offering guideposts to well-being and happiness in eight areas—including relationships, love, and spirituality—Haemin Sunim emphasizes the importance of forging a deeper connection with others and being compassionate and forgiving toward ourselves. The more than twenty full-color illustrations that accompany his teachings serve as calming visual interludes, encouraging us to notice that when you slow down, the world slows down with you.

Haemin Sunim is one of the most influential Zen Buddhist teachers and writers in the world. Born in South Korea, he came to the United States to study film, only to find himself pulled into the spiritual life. Educated at UC Berkeley, Harvard, and Princeton, he received formal monastic training in Korea and taught Buddhism at Hampshire College in Amherst, Massachusetts. He has more than a million followers on Twitter (@haeminsunim) and Facebook and is one of Spirituality & Health’s Top 10 Spiritual Leaders of the Next 20 Years and one of Greatist’s 100 Most Influential People in Health and Fitness. His books—The Things You Can See Only When You Slow Down, which has been published in more than thirty languages, and Love for Imperfect Things—have sold more than four million copies and are popular as guides not only to meditation but also to overcoming the challenges of everyday life. When not traveling to share his teachings, Haemin Sunim lives in Seoul, where he founded the School of Broken Hearts, a nonprofit that offers group counseling and meditation for people experiencing challenges in life.

Chi-Young Kim (co-translator) is the translator of the New York Times bestselling Korean novel Please Look After Mom by Kyung-sook Shin, for which she received the Man Asian Literary Prize, and the Korean contemporary classic The Hen Who Dreamed She Could Fly by Sun-mi Hwang. She lives in Los Angeles, California.

Youngcheol Lee (illustrations) is a Korean artist. His paintings have been shown in more than 150 exhibitions and are admired for their idyllic quality. You can see more of his artwork at www.namusai33.com.