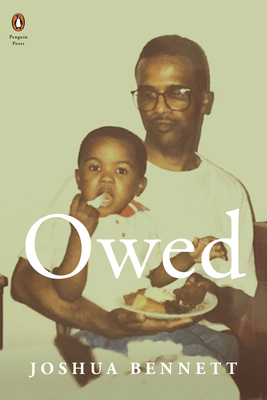 From a 2021 Whiting Award and Guggenheim Fellow recipient, a “rhapsodic, rigorous poetry collection, which pays homage to everyday Black experience in the U.S.” (The New Yorker)

Gregory Pardlo described Joshua Bennett's first collection of poetry, The Sobbing School, as an "arresting debut" that was "abounding in tenderness and rich with character," with a "virtuosic kind of code switching." Bennett's new collection, Owed, is a book with celebration at its center. Its primary concern is how we might mend the relationship between ourselves and the people, spaces, and objects we have been taught to think of as insignificant, as fundamentally unworthy of study, reflection, attention, or care. Spanning the spectrum of genre and form--from elegy and ode to origin myth--these poems elaborate an aesthetics of repair. What's more, they ask that we turn to the songs and sites of the historically denigrated so that we might uncover a new way of being in the world together, one wherein we can truthfully reckon with the brutality of the past and thus imagine the possibilities of our shared, unpredictable present, anew.

Poet, performer, and scholar Joshua Bennett is the author of two collections of poetry, Owed and The Sobbing School, as well as a book of criticism, Being Property Once Myself: Blackness and the End of Man. His first work of narrative nonfiction, Spoken Word: A Cultural History, is forthcoming from Knopf. He received his PhD in English from Princeton University, and is currently Mellon Assistant Professor of English and Creative Writing at Dartmouth College. His writing has been published in The New York Times Magazine, The Paris Review, Poetry, and elsewhere, and he was the recipient of a Whiting Award and a Guggenheim Fellowship in 2021. He lives in Boston.