Tales of Two Planets: Stories of Climate Change and Inequality in a Divided World 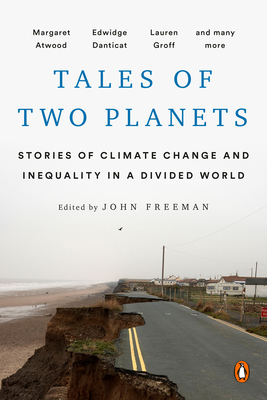 Tales of Two Planets: Stories of Climate Change and Inequality in a Divided World

Building from his acclaimed anthology Tales of Two Americas, beloved writer and editor John Freeman draws together a group of our greatest writers from around the world to help us see how the environmental crisis is hitting some of the most vulnerable communities where they live.

In the past five years, John Freeman, previously editor of Granta, has launched a celebrated international literary magazine, Freeman's, and compiled two acclaimed anthologies that deal with income inequality as it is experienced. In the course of this work, one major theme came up repeatedly: Climate change is making already dire inequalities much worse, devastating further the already devastated. But the problems of climate change are not restricted to those from the less developed world.

Galvanized by his conversations with writers and activists around the world, Freeman engaged with some of today's most eloquent storytellers, many of whom hail from the places under the most acute stress--from the capital of Burundi to Bangkok, Thailand. The response has been extraordinary. Margaret Atwood conjures with a dys¬topian future in a remarkable poem. Lauren Groff whisks us to Florida; Edwidge Danticat to Haiti; Tahmima Anam to Bangladesh; Yasmine El Rashidi to Egypt, while Eka Kurniawan brings us to Indonesia, Chinelo Okparanta to Nigeria, and Anuradha Roy to the Himalayas in the wake of floods, dam building, and drought. This is a literary all-points bulletin of fiction, essays, poems, and reportage about the most important crisis of our times.

John Freeman is the editor of Freeman's, a literary annual of new writing, and executive editor of Literary Hub. His books include How to Read a Novelist and Dictionary of the Undoing, as well as Tales of Two Americas, an anthology about income inequality in America, and Tales of Two Cities, an anthology of new writing about inequality in New York City. He is also the author of two collections of poems, Maps and The Park. His work is translated into more than twenty languages, and has appeared in The New Yorker, The Paris Review, and The New York Times. The former editor of Granta, he teaches writing at New York University.

I had the pleasure of getting to read an advanced reader’s copy of this collection, which brings together such powerful voices as Margaret Atwood, Edwidge Danticat, Lauren Groff, Eka Kurniawan, and many others, to tell the lived stories of our current climate crisis; to help “wake [us] up into the present,” as Freeman puts it in his introduction. The poetry, essays, and stories here are short enough to peruse during an unplanned free moment. They will reward you a thousandfold for having done so, and leave you energized for the rest of the day. It was originally planned to be released April 21 [2020] but that publication date has been pushed back to August 4 [2020], so I apologize for the advance hype! It is absolutely worth the pre-order.

From The Days (and Weeks, and Months...) the Earth Stood Still