The Solar System for Smartypants 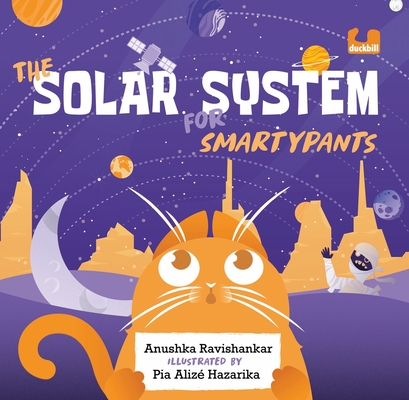 The Solar System for Smartypants

By  Anushka Ravishankar
$ 9.99
Pre-Order (Not Yet Published)

Are you a Smartypants?
Do you ask a lot of questions? Like--
Is the Sun really a star?
Which is the hottest planet?
Are Saturn's rings made of diamonds?
If you do, then you just might find the answers in this book.
It has gorgeous pictures, simple explanations and a very curious cat!

Anushka Ravishankar, often called the Indian Dr. Suess, has been a pioneer in writing both nonsense in contemporary English in India and also picture books. Some of the earliest Indian picture books to be published internationally and win international awards were by her, such as Tiger on a Tree, Catch that Crocodile and Elephants Never Forget. She has gone on to collaborate with many international illustrators to create some extraordinary picture books.

She is also the co-founder of the much-acclaimed indie publishing house, Duckbill.

The blend of humor, realism and nonsense in Anushka's writing, as well as the charm of the characters she creates, has won her many fans in India and internationally.

Pia Alize Hazarika is an illustrator primarily interested in comics and visual narrative. Her independent/collaborative work has been published by Penguin India (The PAO Anthology), COMIX.INDIA, Manta Ray Comics, The Pulpocracy, Captain Bijli Comics, Yoda Press, Zubaan Books and the Khoj Artists Collective. She runs PIG Studio, an illustration-driven space, based out of New Delhi.