Looking For Spinoza: Joy, Sorrow, and the Feeling Brain 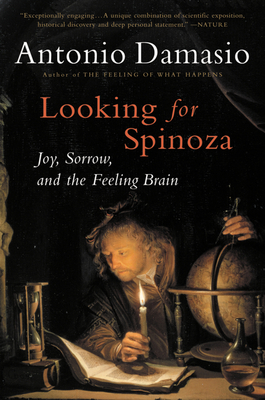 Looking For Spinoza: Joy, Sorrow, and the Feeling Brain

A "clear, accessbile" investigation into the philosophical and scientific foundations of human life, from one of the world's leading neuroscientists (San Francisco Chronicle).

Joy, sorrow, jealousy, and awe—these and other feelings are the stuff of our daily lives. In the seventeenth century, the philosopher Spinoza devoted much of his life's work examining how these emotions supported human survival, yet hundreds of years later the biological roots of what we feel remain a mystery.

Antonio Damasio—whose earlier books explore rational behavior and the notion of the self—rediscovers a man whose work ran counter to all the thinking of his day, pairing Spinoza's insights with his own innovative scientific research to help us understand what we're made of, and what we're here for.

ANTONIO DAMASIO is the David Dornsife Professor of Neuroscience and Director of the Brain and Creativity Institute at the University of Southern California. He is also an adjunct professor at the Salk Institute for Biological Studies in La Jolla. He is a member of both the Institute of Medicine of the National Academy of Sciences and the American Academy of Arts and Sciences. Descartes’ Error was an international bestseller. The Feeling of What Happens has been translated into seventeen languages.