Forgotten Bastards of the Eastern Front: American Airmen Behind the Soviet Lines and the Collapse of the Grand Alliance 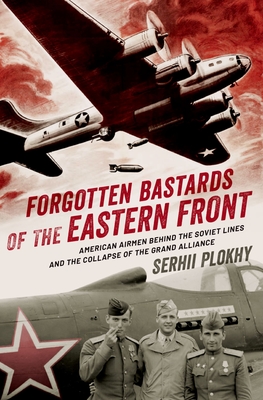 Forgotten Bastards of the Eastern Front: American Airmen Behind the Soviet Lines and the Collapse of the Grand Alliance

At the conference held in in Moscow in October 1943, American officials proposed to their Soviet allies a new operation in the effort to defeat Nazi Germany. The Normandy Invasion was already in the works; what American officials were suggesting until then was a second air front: the US Air Force would establish bases in Soviet-controlled territory, in order to "shuttle-bomb" the Germans from the Eastern front. For all that he had been pushing for the United States and Great Britain to do more to help the war effort--the Soviets were bearing by far the heaviest burden in terms of casualties--Stalin, recalling the presence of foreign troops during the Russian Revolution, balked at the suggestion of foreign soldiers on Soviet soil. His concern was that they would spy on his regime, and it would be difficult to get rid of them afterword. Eventually in early 1944, Stalin was persuaded to give in, and Operation Baseball and then Frantic were initiated. B-17 Flying Fortresses were flown from bases in Italy to the Poltava region in Ukraine. As Plokhy's book shows, what happened on these airbases mirrors the nature of the Grand Alliance itself. While both sides were fighting for the same goal, Germany's unconditional surrender, differences arose that no common purpose could overcome. Soviet secret policeman watched over the operations, shadowing every move, and eventually trying to prevent fraternization between American servicemen and local women. A catastrophic air raid by the Germans revealed the limitations of Soviet air defenses. Relations soured and the operations went south. Indeed, the story of the American bases foreshadowed the eventual collapse of the Grand Alliance and the start of the Cold War. Using previously inaccessible archives, Forgotten Bastards offers a bottom-up history of the Grand Alliance, showing how it first began to fray on the airfields of World War II.

Serhii Plokhy (Plokhii) is Mykhailo Hrushevsky Professor of History and director of the Ukrainian Research Institute at Harvard University, where he also serves on the Executive Committee of the Davis Center for Russian and Eurasian Studies. He is the author of over a dozen books on the history of Eastern Europe and the Cold War, including Yalta and Chernobyl, which was awarded the 2018 Baillie Gifford Prize (formerly the Samuel Johnson Prize).