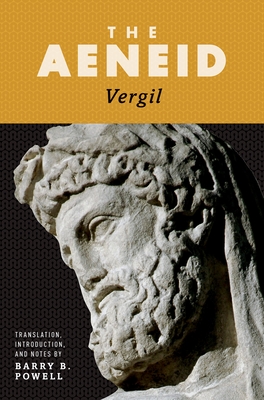 Barry Powell, acclaimed translator of the Iliad (OUP, 2013) and the Odyssey (OUP, 2014) now delivers a graceful, lucid, free-verse translation of the Aeneid in a pleasant modern idiom. On-page notes explain obscure literary and historical references, while the rich visual program lightens the
text and educates students in the history of Western art by presenting a single topic as represented over 2,000 years.

The Aeneid's first sentence charts the poem's historical plot, taking us in one sweep of seven lines from Homer's Troy to Augustus' Rome. These two layers of time are felt all the way through the poem, from the distant past of Aeneas' heroic and quasi-mythological time, over 1100 years before
Vergil, down to the now of Augustus' Rome, when Vergil was writing the poem between 30 and 19 BC, a period of ongoing political experimentation. The story of Aeneas--moving from one continent to another, undergoing and enforcing great transformations in the process--transplants contemporary Augustan preoccupations with transition, continuity, and change into the remote time of the poem's action. In the course of the poem we move from the
East to the West, from Troy to Italy, as Aeneas moves from being a Trojan towards being something else, a kind of Roman in embryo. The poem's migratory movement, together with its wholescale assimilation of Homer, acts out another great transition, the transition of Greek culture to Italy: just as
the people of ancient Italy become the inheritors of Troy, so the people of Vergil's Italy become the inheritors of Greece. The very location of the poem in time is transitional, at the pivot between myth and history: the poem's characters are moving out of the era of Homer into the era of what
Vergil would have considered non-fabulous history. In all these ways the Aeneid is a great poem of history, both as lived experience and as something constructed by people responding to the needs of society. Featuring a stellar, up-to-date introduction, on-page notes, embedded illustrations, five maps, a timeline of Roman history, and a genealogical chart, Powell's Aeneid offers a full immersion into the mythological and political workings of the poem. It is a book both good to think with, and good to
teach with.

Barry B. Powell is the Halls-Bascom Professor of Classics Emeritus at the University of Wisconsin-Madison, where he taught for thirty-four years. His translations of the Iliad (2013) and the Odyssey )2014) were also published by Oxford University Press.