Fire and Steel: The End of World War Two in the West 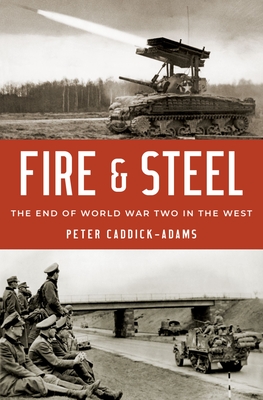 Fire and Steel: The End of World War Two in the West

The final volume in one of the most acclaimed works of military history of this generation.

Here is Peter Caddick-Adams' third volume in his trilogy about the final year of the Western front in World War Two. Fire & Steel covers the war's final 100 days-beginning in late January 1945 and continuing until May 8th, 1945, when the German high command surrendered unconditionally to all Allied
forces. Caddick-Adams' previous two volumes in the acclaimed series-Sand & Steel, which covers the invasion of Normandy in June 1944, and Snow & Steel, the definitive study of the Battle of the Bulge, the German's final offensive in the war-have set the stage for this concluding volume. In these final months of World War Two, all of Germany is ablaze, from daily bombing runs launched from just across its borders and incessant artillery fire from the east. In the west, the Allied progress was inexorable, with Eisenhower's seven armies taking on Germany's seven armies, town by town,
bridge by bridge. With his customary narrative verve and utter mastery of the material, Caddick-Adams does these climactic final months full justice, from the capture of the Ludendorff Railway Bridge at Remagen, to the liberation of the Bergen-Belsen concentration camp, to the taking of Munich on
Hitler's birthday, April 20th, and through to VE Day. Fire & Steel ends with the return of prisoners, demobilization of servicemen, and the beginning of the occupation of Germany. A triumphant concluding volume to one of the most distinguished works of military history of this generation.

Peter Caddick-Adams is a lecturer in military history and current defense issues at the Defence Academy of the United Kingdom. He is the author of Monte Cassino: Ten Armies in Hell, Sand and Steel: The D-Day Invasion and the Liberation of France, and Snow and Steel: The Battle of the Bulge, 1944-45.He holds the rank of major in the British Territorial Army and has served with U.S. forces in Bosnia, Iraq, and Afghanistan.