White Privilege: What Everyone Needs to Know(r) 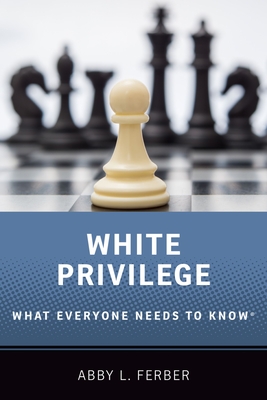 White Privilege: What Everyone Needs to Know(r)

With media coverage of racially charged police brutality and the emergence of Black Lives Matter, the national debate on race and racism in the US has begun to change. As part of that change, the concept of white privilege has moved from radical and academic circles into the mainstream, prompting support from some, opposition or dismissal from others, and misunderstanding from both sides.

White Privilege: What Everyone Needs to Know(R) provides succinct but in-depth coverage of the systemic advantages-sometimes visible but mostly unseen-that white people benefit from as well as the absence of obstacles and barriers regularly faced by people of color that whites avoid. In a straightforward Q&A format, noted authority Abby Ferber touches on the essential components of white privilege-historical context, what helps create and sustain it, how it works, how it differs from overt bias and discrimination, how it is discussed publicly, and how whites can respond to escalating racial tension. Clear, concise, and informed, this book offers a valuable primer for anyone interested in untangling the complex and often contentious topic of race and race relations in the US.

Abby L. Ferber is Professor of Sociology at the University of Colorado, Colorado Springs.